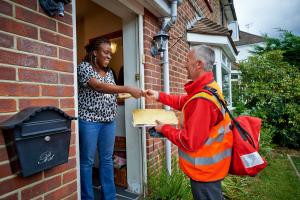 Check your mail on Saturday 27 June to see a special postmark in honour of the nation’s Armed Forces!

Royal Mail, who reserve their postmarks for special occasions such as historical anniversaries, today announced their plans for a dedicated postmark for Armed Forces Day 2015.

The mark will appear printed on millions of letters, parcels and postcards, arriving at addresses across the UK on Armed Forces Day itself.

“Royal Mail employs many ex-Servicemen and women and a number of Reservists across the country so we’re pleased to be marking Armed Forces Day in this way.”

“The postmark is a fantastic way of bringing the whole country together to celebrate our Armed Forces community.

“It’s wonderful to see Royal Mail support our Servicemen and women for Armed Forces Day, and I would encourage other businesses and organisations to do all they can to show their support.”

If you see the postmark on your mail next weekend, why not let us know on facebook or twitter!

You can also show your support by sending us a picture of a military salute using the hashtag #SaluteOurForces, adopting a Twibbon as a brilliant visual way of getting behind our Armed Forces or joining our mass coordinated effort of support on Thunderclap.