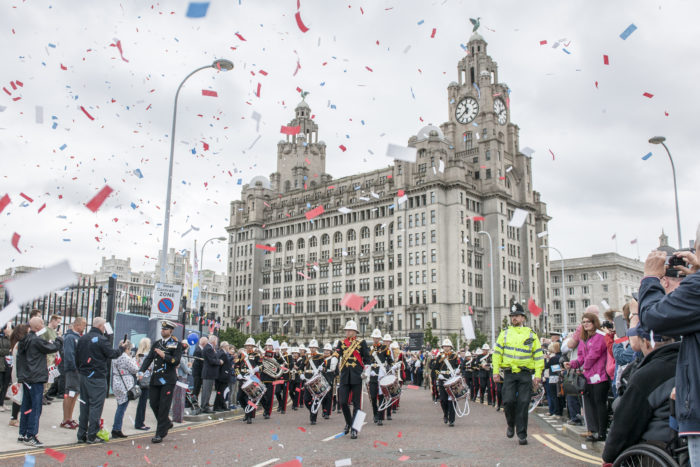 More than 300 different events took place around the world today to thank the UK’s Armed Forces for their work at home and abroad.

The ninth annual Armed Forces Day centred on Liverpool, where regulars, reserves, their families and veterans gathered for a parade, receptions, displays, a ship visit and a Red Arrows flypast.

There were hundreds more significant events to thank the UK’s forces, from Caerphilly to Plymouth to Edinburgh here and from the Falkland Islands to Cyprus overseas.

Ahead of the event Prime Minister Theresa May said:

“I am proud to be in Liverpool to see such strong support for our Armed Forces. I’ve seen first-hand the amazing job that the men and women of all three services do, whether helping to deal with the recent emergencies we have seen here in Manchester and London or taking the fight to Daesh in Syria and Iraq.

“It is right that we show our support, both by holding events such as this and ensuring that that those who serve or have served, and their families, have what they need. That is why I welcome the fact that we have now helped thousands of families buy a home.”

Ahead of Liverpool’s event Defence Secretary Sir Michael Fallon confirmed that more than 10,000 service personnel have been able to climb the housing ladder using Forces Help to Buy scheme payments.

Since its launch in April 2014 more than £163m has been paid to scheme applicants, allowing service personnel and their families to borrow up to half their salary to buy their own home.

Defence Secretary Sir Michael Fallon said: “We owe a huge gratitude to the men and women of our Armed Forces and salute their service in keeping us safe each and every day.

As we celebrate Armed Forces Day there are 10,000 regulars and reserve personnel serving now on NATO operations, there are Royal Navy ships serving in the Gulf, the British Army is supporting UN peacekeeping in South Sudan and the Royal Air Force are patrolling the skies above the Black Sea region.

“The Help to Buy milestone demonstrates our promise to ensure that our Armed Forces and their families can enjoy the stability of owning their own home. It is part of our commitment to them in return for the immeasurable commitment they make to us.”

Saturday’s event in Liverpool will consist of a large-scale military parade from St George’s Hall to the Pier Head supported by bands. Reflecting Liverpool’s strong connection with the Royal Navy, the Type-23 frigate HMS Iron Duke will be docked in the city. In the air there were flypasts by the Red Arrows and the Battle of Britain Memorial Flight. Military villages of static displays, machines and equipment completed the show.

UK Armed Forces are currently involved in over 20 operations in more than 25 countries, from South Sudan to Iraq. Also present will be many veterans that make-up the estimated 2.56 million Armed Forces veteran community living in the UK. Young cadets will be present too; together the Sea, Army, and Air cadet forces have almost 100,000 members, many of whom will be at events up and down the country.