Reservists across the country from the Royal Navy, Royal Marines, Army and RAF are swapping their civilian clothes for military uniforms today (25 June) to celebrate Uniform to Work Day. 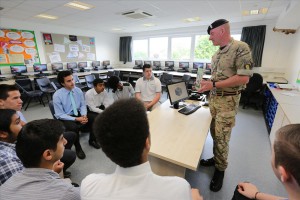 The day is a chance for the country to celebrate the huge contribution ordinary men and women make to the Armed Forces, and is part of a week-long series of events building up to Armed Forces Day on Saturday 28 June. By wearing their military uniform to their civilian place of work, Reservists are highlighting how it is ordinary citizens who are going the extra mile for their country.

I am proud that so many Reservists are taking part in Uniform to Work Day today – it is right that our Reserves are able to wear their uniforms with pride and remind people of the huge contribution they make. I would also like to thank all the employers around the country who rightly make it possible for their staff to be a part of our Reserves. I hope that even more people will be inspired today to find out about the fantastic opportunities being a member of the Reserves can provide.

Many of the Reservists taking part have served on operational tours and have a wealth of skills and experience from civilian life that they bring to their roles in the Armed Forces.

Craftsman Iain Fitt balances life as a busy school teacher with a career in the Army Reserves. He serves in the Military Stabilisation Support Group (MSSG) – a tri-service organisation made up of Regulars and Reserves – which provides military support to the civilian efforts to stabilise countries around the world which are either emerging from conflict or are at the risk of sliding into chaos.

The 49 year old who served in Afghanistan in 2011 with the Royal Electrical and Mechanical Engineers (REME), teaches Engineering and IT at Eastbury Comprehensive School, in Barking, East London, which was recently shortlisted by the Times Education Supplement for Secondary School of the Year. He said:

I joined the British Army Reserve at quite a late point in my life, but as both my Great Grandfather and Grandfather saw active service I felt that I needed to serve. It has been a decision that has made an immeasurably positive difference to my professional and personal life.Working with such a highly skilled and diverse range of people that reflect modern British society, and who are unquestioningly supportive of each other, is such an uplifting experience. The values and standards that we live and work by equip you with a ‘can do – will do’ mentality that gives you the confidence in your ability to attempt pretty much anything. It is a matter of immense pride to me to be the third generation of my family wearing this uniform.

Iain is a highly valued colleague and first rate teacher. As a Reservist I have seen Iain’s skills and attributes grow enormously to the benefit of the school community. His experience is being used to speak confidently to whole school assemblies on the importance of equality, democracy and education for all across the world, and his work in Army engineering has provided up to date knowledge and skills that have widened the range of subjects he can teach. The school is proud of him.

More than 20,000 people across the UK give up their time to be part of the Armed Forces Reserves, and Reservists have been deployed over 25,000 times since 2003 on operations around the globe. Some 2,000 Reservists provided security at the 2012 Olympic Games in London, and Reservists from 7th Battalion the Rifles contributed to flood relief efforts across affected parts of the UK earlier this year.

You can also get the very latest Armed Forces Day news by following us on Twitter and joining us on Facebook. You can also adopt a Twibbon as a brilliant visual way of getting behind our Armed Forces, leave a message of support and join our mass coordinated effort of support on Thunderclap.