Why not show your support for Service personnel past and present this summer by holding an Armed Forces Day celebration? 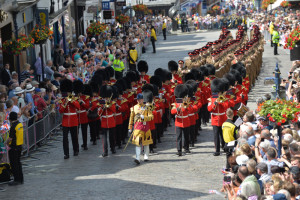 On Saturday 25 June this year, people across the nation will be holding local celebrations to say “Thank You” to members of the Armed Forces community – including current personnel, Reserves, veterans, cadets and families – for their contribution to the nation.

And funding is available to anyone who wants to host an event – from city-wide parades and local fetes, to sports days and smaller neighbourhood get-togethers.

Organisers can bid for up to £10,000 to help make their event, large or small, a success.

Armed Forces Day comes in all shapes and sizes 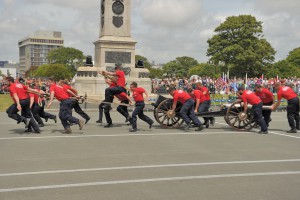 Venetta Evans, 77, from Dunbar in Scotland has organised small Armed Forces Day celebrations in her town for six years, expanding with small amounts of Government funding each year. She started by creating just six Armed Forces Day-themed shop window displays in the year 2000. This year she is helping 28 shops in Dunbar to carry Armed Forces Day displays. She has also arranged parades, tea parties and other activities to help people in the local area honour local service personnel, past and present. She said:

“I’m very proud of my two grandchildren in the Armed Forces, and I wanted to help my neighbourhood learn more about the work they and their colleagues do. Six years on, my displays have gotten bigger and better, I’ve arranged an Armed Forces Day parade, and brought local cadets and veterans together for tea and cake!

The funding I receive from the Ministry of Defence has helped pay for a great many things, from expanding the photograph collection for our window displays to buying flags and providing high visibility jackets for parade stewards. It’s helped Dunbar Armed Forces Day celebrations to grow and I’m already making big plans for the years to come”

In 2015, more than 170 Armed Forces Day celebrations were held across England, Scotland, Wales and Northern Ireland, and over 120 were supported with funding from the Ministry of Defence (MOD).

This year, the national event will be held in North East Lincolnshire, with the coastal town of Cleethorpes hosting a military parade, air displays, music, entertainment and family activities that will make a great day out.

However, no event is too small – every year bids for a few hundred pounds are granted to assist smaller events, such as displays, school talks or family fun days for just a few hundred visitors. 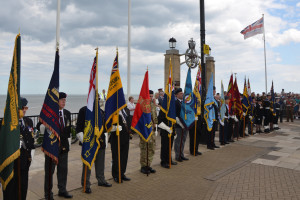 “Armed Forces Day is chance for the public to show their support for everyone in the Armed Forces community. Now in its eighth year, we’ve funded a huge variety of Armed Forces Day events, from horse races to music events. We want to make sure that every community across the UK has an opportunity to convey their thanks through their own unique local event.”

To find out more about the application process and funding criteria, contact the MOD Armed Forces Day team by email: armedforcesday-events@mod.uk or by telephone: 020 7807 0970.  Anyone interested in applying for funding should submit an application by 15 April 2016.