While most people were preparing for Christmas last winter, severe flooding was causing destruction across the north of England. The Army regiments who helped communities in their hour of need are just one reason to #SaluteOurForces this Armed Forces Day.

Here’s a look at the work of just one of those units.

Soldiers of the 2nd Battalion The Duke of Lancaster’s Regiment (2 Lancs) were among the regiments who helped communities across Cumbria, Lancashire and Yorkshire in December 2015. 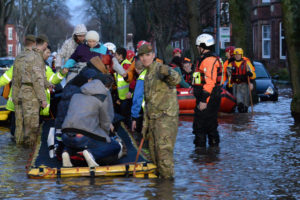 After some of the highest recorded rainfall for the area in recent times, the locally recruited division worked tirelessly alongside the efforts of civilian authorities such as the councils and Fire and Rescure Service to inform, warn and assist residents whose homes were at risk of flooding.

Within hours of being tasked on 6 December, 2 Lancs soldiers were in Carlisle, Cumbria, and Hutton, Lancashire, evacuating people where needed, and transporting people to safer locations.

As well as warning and informing residents about the flood risk, their military vehicles were often the best suited to accessing severely flooded routes.supporting the Fire and Rescue services, councils and other services under pressure.

By Christmas Day, the soldiers had moved across the Pennines to support the citizens of York. 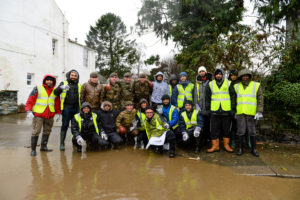 And days later they joined the cleanup, working alongside volunteer organisations from across the region.

Major Nick Higgins, Officer Commanding Blenheim Company 2 Lancs, said of his team’s work “I hope we have helped to alleviate some of the distress which is affecting these communities.”